It is great to have fixtures to attend again! Here are our Year 5 and Year 6 football teams. The Year 6s reached the finals at Hayesbrook and were runners-up.

The Year 5s came second at the recent KCSP football tournament held at St Gregory's in Tunbridge Wells, beaten in the finals by a team they had already played and won against.

We met the Pope by accident!

When we arrived in Malta for our Easter holidays, we were surprised to find the roads blocked and crowds waiting. Then we found out that the Pope was visiting! He was so close that we managed to take photos.

Bouldering at the Chimera Centre - great fun and new skills!

As part of Yr 5 and 6's learning in PSHE: roles in the community, we had the visit of the police and their dogs. They talked about their work and gave demonstrations. The "Angry Man" demonstration was most impressive!

Year 5 threw themselves into the spirit of their Mexico Day: dance, food and crafts were all part of the schedule.  They used the fire pit for cooking tortillas.  The weather could not have been better.

Yr 6 writing based on Romeo and Juliet

Maps of Italy, showing the relief, together with human and physical features. 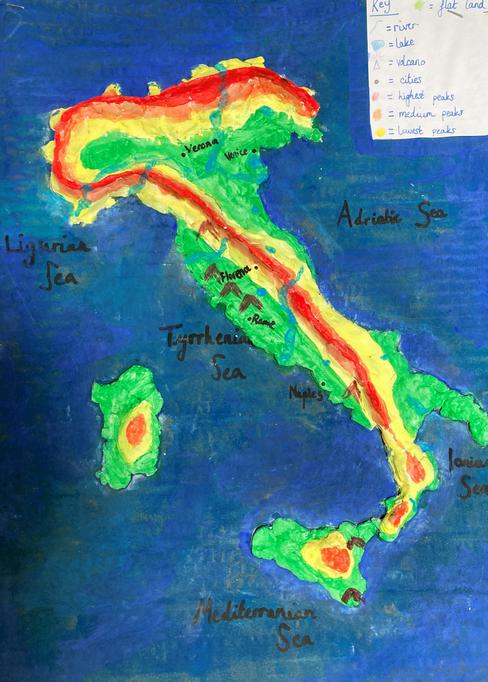 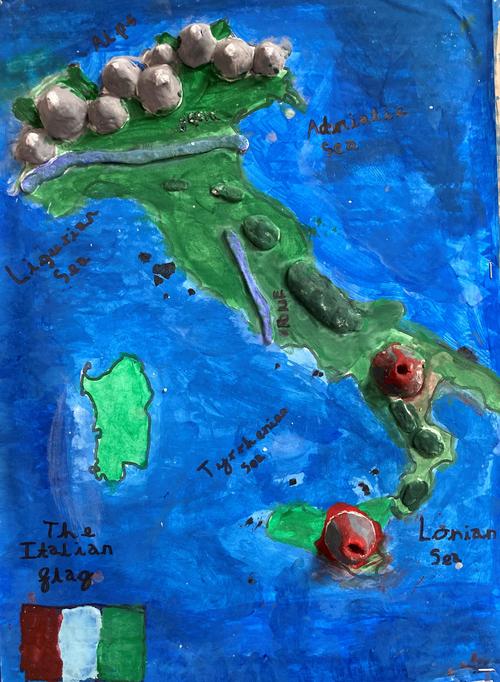 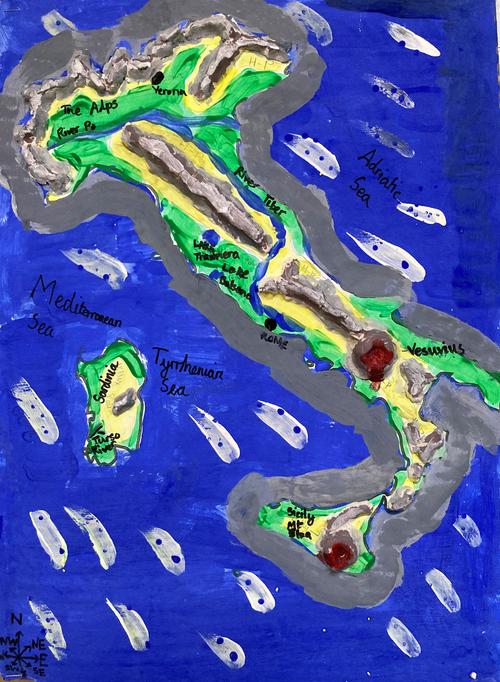 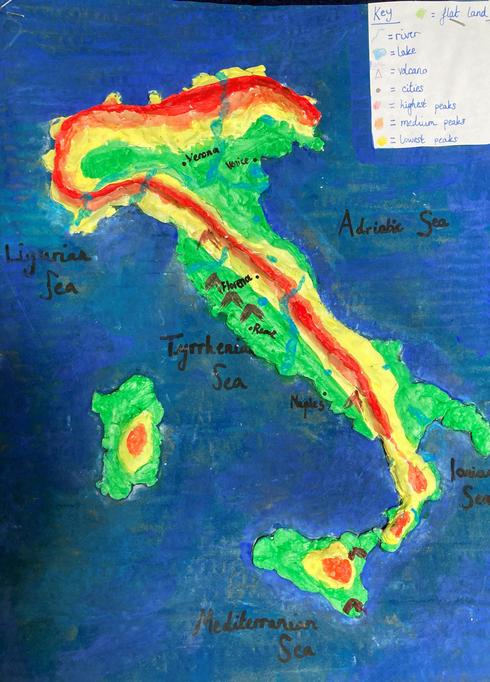 Our over-arching topic
Inspired by "A Letter for the King"

Year 5's History learning has been interwoven with their English. Here are some extracts from recounts of the Battle of Hastings.

The valley was awash with wounded and dead soldiers, their agonising screams echoing into the distance. The sky was blacka s charcoal and the embers of the once great fire flickered stealthily. The newly crowned King William had vanished from the battlefield and left all those that remained to suffer. Molten red blood leaked from the dead soldiers like a sea of red. The wind was calm and full of sorrow as it whispered into the ears of the dead soldiers.

A river of debris and ash trickled down the hill side. I knew I had to give up my dream of being a knight, it wasn’t safe anymore now that a new king had been crowned. Sorrowfully, I sat down in a puddle if you could call it that, it was more like a mixture of debris and blood. I gazed up into the forbidding darkness wondering if I would see daylight again, I felt a weird pain like my whole body was on fire .Then I felt nothing at all.

I looked around. All I could see was dead bodies, piled upon each other like pancakes. The battle was almost over. The sound of absolute chaos had converted to a quieter sound. All I could hear was distant chinking sound of swords like cutlery being used, but mostly all I could hear were the agonising screams and groans of the injured and dying. All I could smell was the smell of death. It smelled like a butcher's shop. The sky was now as black as coal apart from the flames climbing higher and higher from the damage that had been done to the equipment of the soldiers. I could hear horses with no riders running in different directions like headless chickens. Lots of thoughts burst through my mind. What would William be like as a ruler. I could hear the distant sound of cheering of William's soldiers which pierced the air like a knife. The battle was won.

Fists in the air and the battle has begun. Daggers being thrown and swords piercing hearts. Molten-red blood spurted out of the dead bodies in front of me. Soldiers screaming like new-born babies as they die, and the smell of fear filled the air. I feel petrified, but I continued to fight the enemies.

As the bodies drop like flies, the chaos of battle draws to a close. The eerie silence only interrupted by the muffled moans of death. All I could see was an ocean of molten-red blood where the lush green grass used to lie. The landscape littered with dead, blood-stained bodies. The flags, no longer dancing, lay limp in the still air.

William's army are victorious! He is now our ruler, but at what cost, so many lives ended. I hope that this isn't a sign for our unknown future.

As an eerie silence engulfed the battlefield, I could feel my heart pounding against my armour. With my sword glistening, I could feel a rush of adrenalin surging through my veins. I could see enemies on the horizon like a sea of metal. Suddenly I heard a rumble of thunder which sounded like an ominous drum roll. All of a sudden with a melancholy wail, the horns started the battle and summoned us to our fate. The earth trembled as the thundering hooves approached. Then I ran into the battlefield like an angry bull. Arrows rained down like vicious raindrops over me and kept punishing the enemies. The suffocating smoke engulfed my lungs like a deadly virus. Blood slithered its way under my feet like a crimson snake through the squelching sludge. The enemy collapsed as my brutal blade sliced through his fragile flesh. A landscape of dead soldiers, their faces deathly pale, surrounded me like a snake. A quiet sound drifted around the battle field. All I could hear were a few swords clashing against each other. Flags danced around like ballerinas to recognise that I William had won the most legendary and bloody battle in history. Finally, we trudged through the sludge and off the battle field like weary cattle.

It was my first time in a battle and the eerie silence that surrounded us as we stood in line ready for the battle was frightening, but I was determined not to look it. We waited in silence for the enemy to arrive and when they finally did a noise rang out around the battlefield signalling for the battle to start and that noise I would never forget. Soldiers all around me drew their weapons, their metal tips glistening in the sunlight all sharpened and polished ready for battle. I did the same and watched as the enemy took up their positions shields in front of them and we waited once more for the final blow of the horn. Then there it was a sound that shook the whole earth as if that itself was scared of the horrible noise. It took a moment to take in but then it all came to life the arrows screaming, cavalry charging, swords glinting in victory as molten red blood trickled down them. Already just after a minute of battle many had fallen. I stared up at the hillside where the English stood behind their shield wall our arrows now sticking out of the shields, it wouldn't be long now until we would break it, I thought. Then as another man fell, I charged into battle... 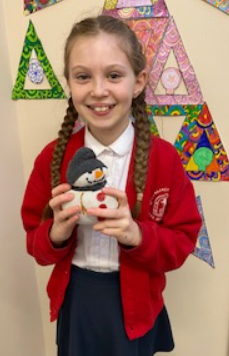 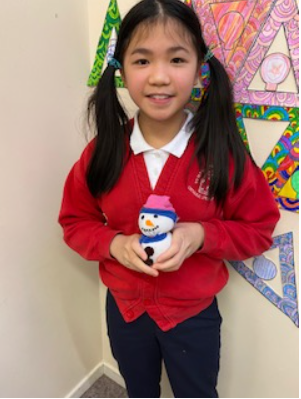 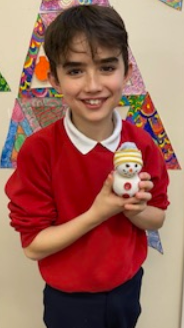 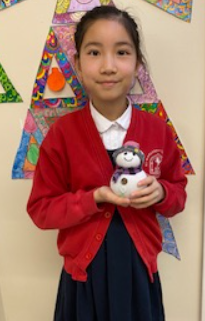 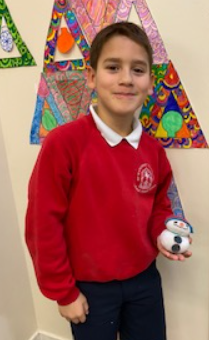 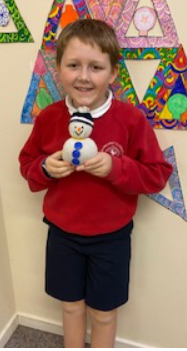 Year 5 are basing their learning on Mexico; art and writing interlinked

Year 6 have been learning about the 20th Century in all aspects of the curriculum. They used what they have learnt of Cubism in art to create these powerful depictions of the Titanic's sinking. I am sure you will notice echoes of Picasso's 'Guernica'.

Writing is also linked to draw on their historical knowledge

Years 5/6 have used found materials to create animals. Enjoy trying to guess them! 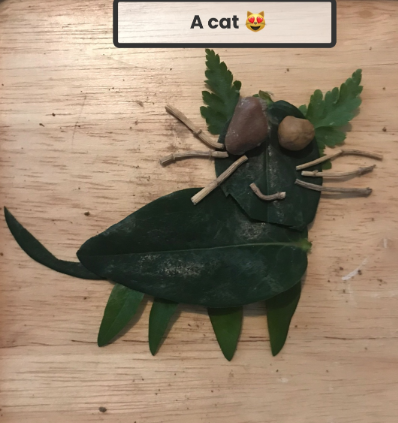 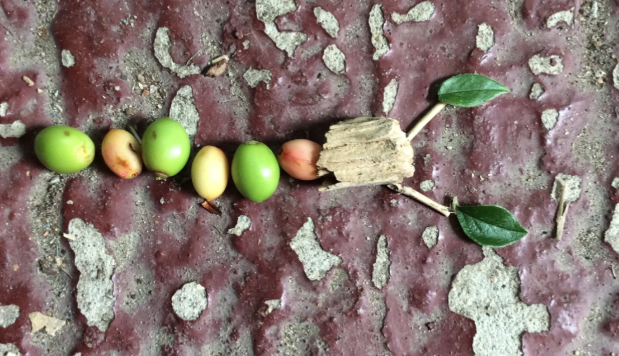 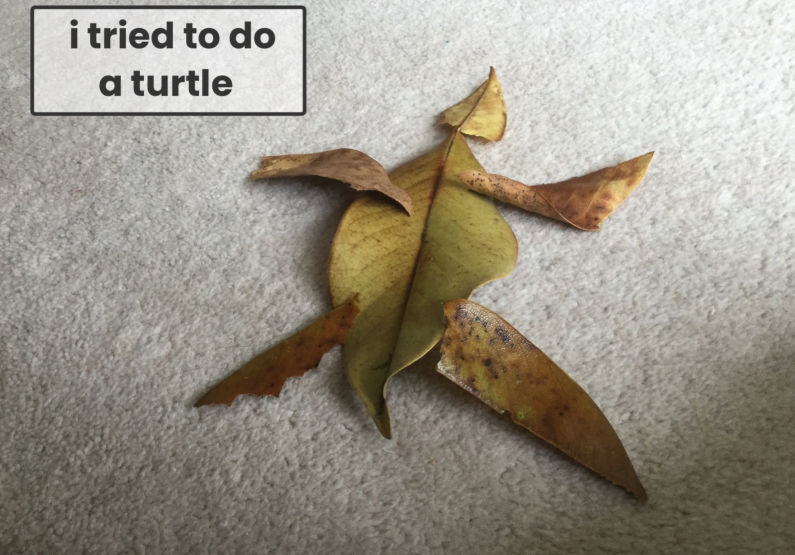 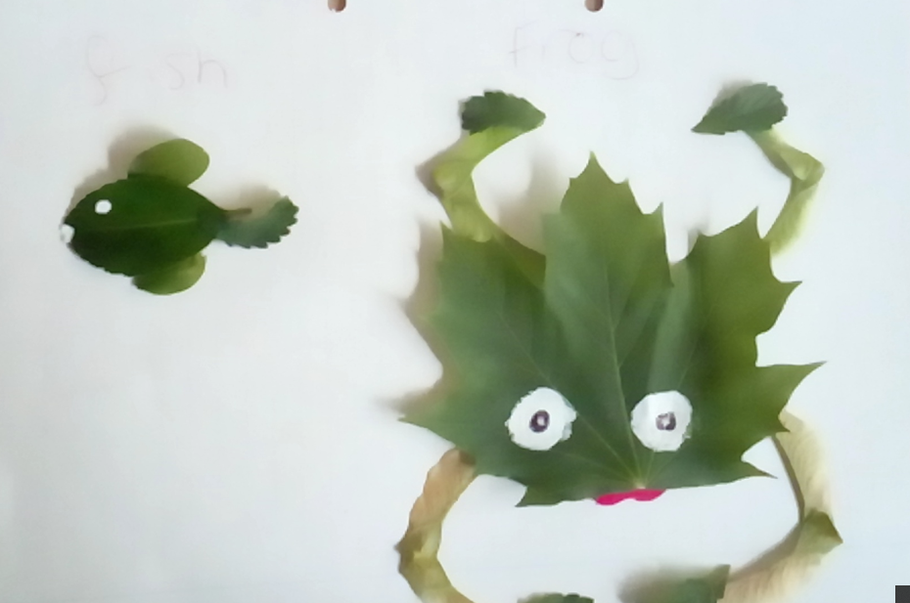 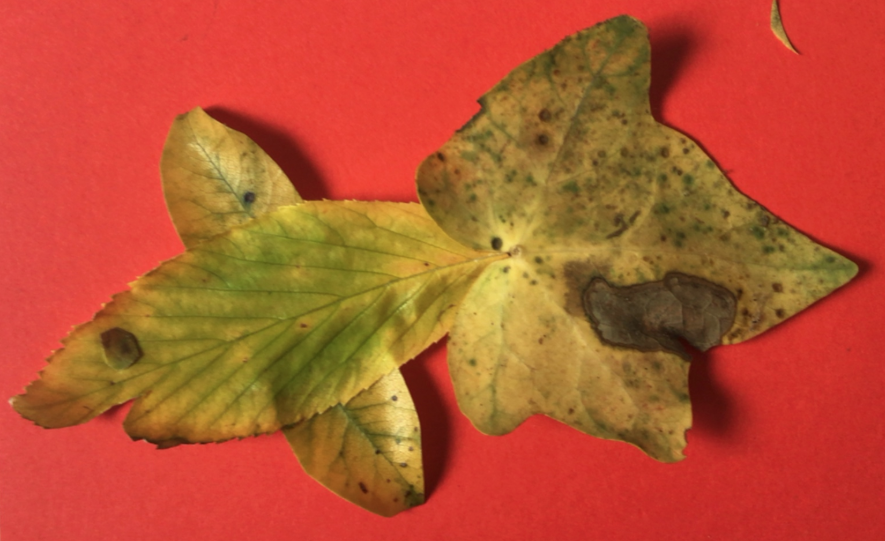 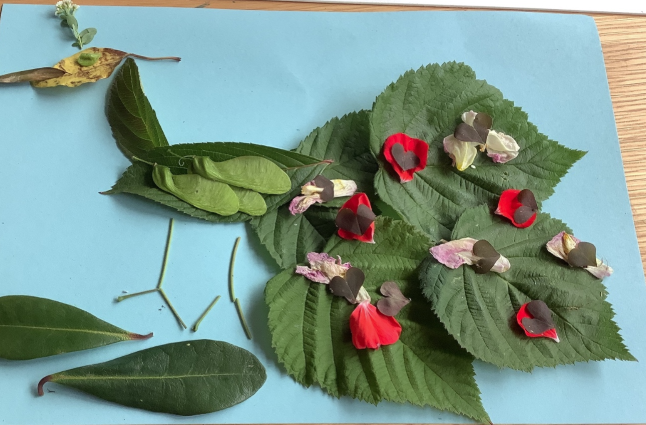 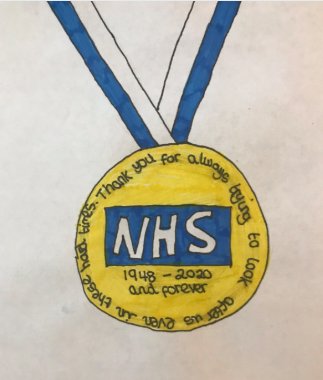 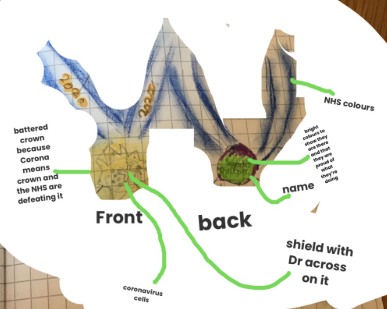 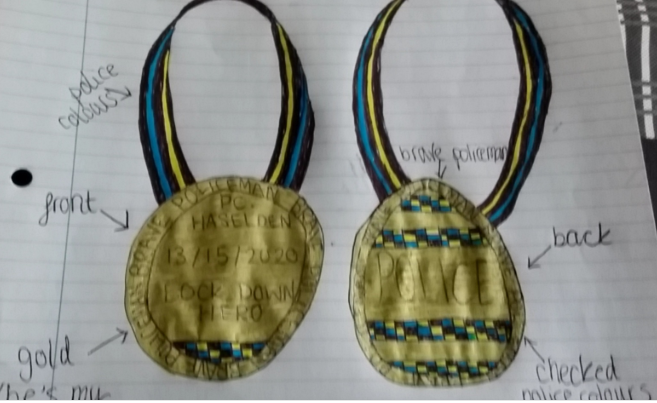 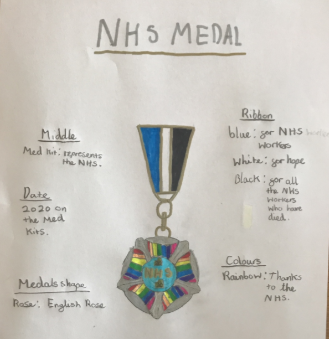 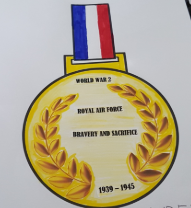 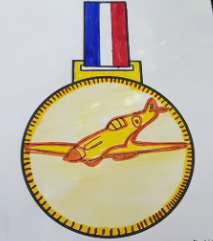 Evaluation of my DT- making a medal

- how did you do? What worked well? I used tin foil and folded it about 4 times to make it strong and then I hot glued the cut out layers together.

What did you like about your design? I really like the rainbow and writing on my design because it symbolizes what the medal is being awarded for.

What interesting techniques did you try? I tried folding the layers of tin foil as much as I could for extra strength and the glue was to hold all of the layers together.

Yr 6 - Meditation in this time of isolation

Jesus has overcome death, torture and betrayal. Even though he knew they were going to happen he still sacrificed himself to redeem all of our sins so we could know we would always be forgiven by God no matter what the circumstances. In this time when we are in lock-down and there are quite a lot of negatives there are always positives like:

Playing more in the garden,

Spending more time with your family,

Playing with my sister more,

Calling my friends on video calls and doing Joe Wicks every day.

My family have told me to hope for the best and that we will get through this together. Also like one of the passages we read before the lock-down said that your life will not get any longer if you worry, so why worry? When things are not going well, you need to keep hope in God, because no-one but God knows what is coming next. 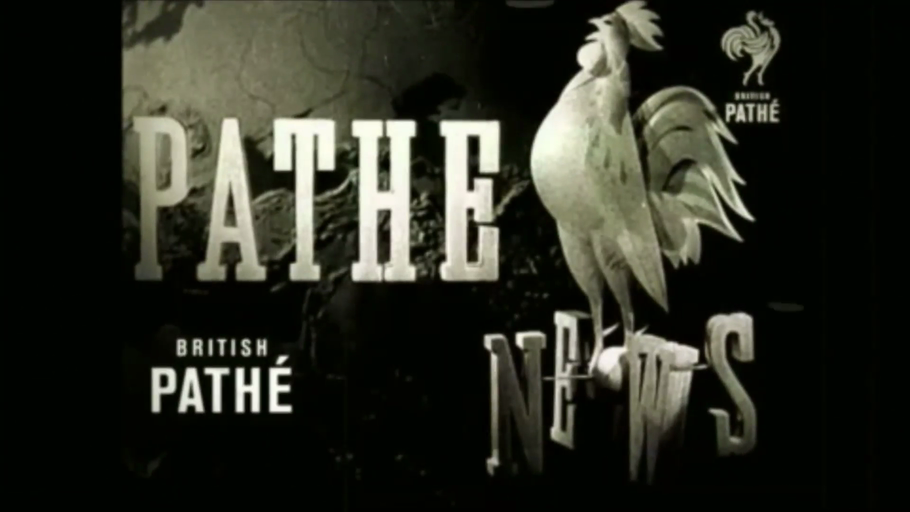 Yr 5/6 have been inspired by their learning about World War II: evacuees, newsclips, reporters, DT projects... 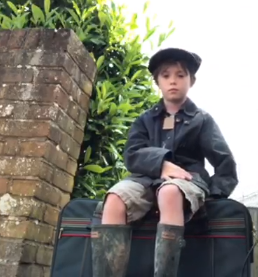 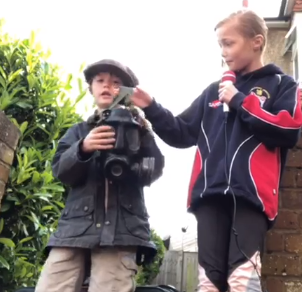 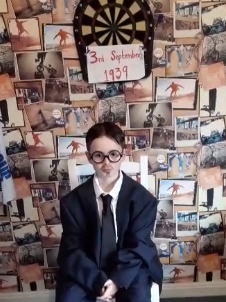 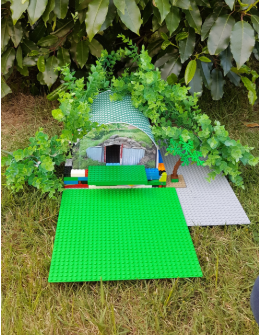 Impressive bakers in Years 5 and 6! 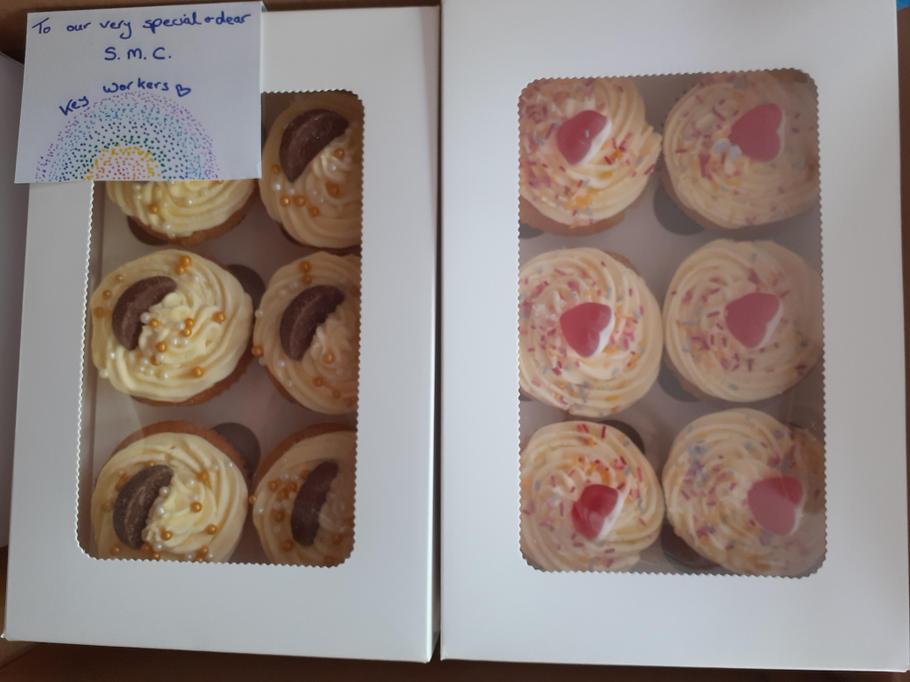 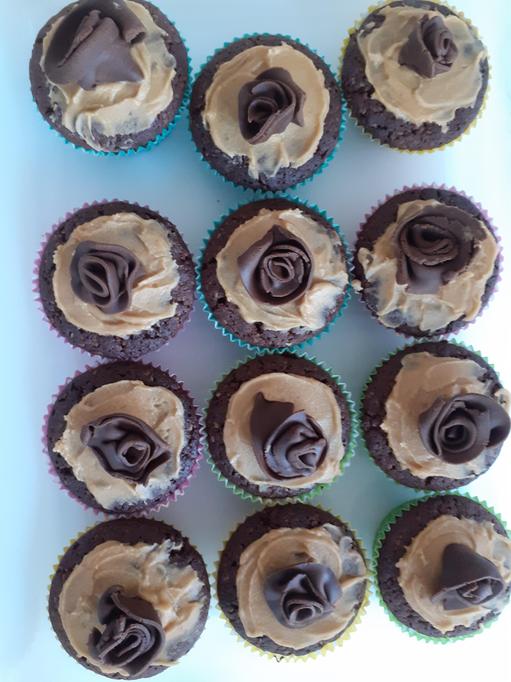 What a week!! Two sports mornings, one school trip, Fathers' day breakfast and Jubilee celebrations! It was great to have families back in school.
Top

Unfortunately not the ones with chocolate chips.

Some cookies are necessary in order to make this website function correctly. These are set by default and whilst you can block or delete them by changing your browser settings, some functionality such as being able to log in to the website will not work if you do this. The necessary cookies set on this website are as follows:

Cookies that are not necessary to make the website work, but which enable additional functionality, can also be set. By default these cookies are disabled, but you can choose to enable them below: